I am so sorry – it has been a loooong time since I wrote my last post. I am sorry.
Life just happened in between and my priorities changed!

Actually I thought about my upcoming post and I prepared my notes for my favorite topic (at the moment): HAPPINESS.

But – somehow I felt the strong desire to rather tell you more about ASTANA and right after about ALMATY in Kazakhstan.

The first time I arrived in Astana (December) – I was shocked by the cold temperatures. Obviously it did not really help coming straight from Abu Dhabi & 32°C.

I went to visit my best travel buddy and partner in crime, my boyfriend who recently moved there.
To be honest – Astana was not on my bucket list till then – but I really have to admit that I left with a heart full of gratitude and the desire of coming back.

DAY 1 (evening only)
My trip started off pretty well since he got Opera Tickets for us.
I dropped this wish in one of our conversations and was not really prepared for it.

Prior making it to the Opera tho – I encountered the huge language barrier at the airport & in the taxi. Incredible. No one spoke English. I believe it is ok to say that I have been roaming around the world since quite a while but never – ever – came across THIS during my journey.
Taxi drivers rather strange than friendly – was not sure whether he was asleep or dead…?

Somehow I managed to get my visa and left to the Opera House. 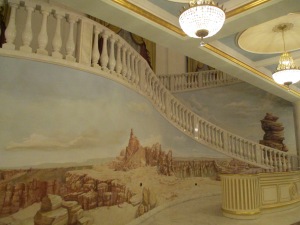 Priority was obviously to hug my love since we have not seen each other for a while – but right after I got overwhelmed by the beauty of this traditional architectural masterpiece.

We enjoyed our evening, indulged in those classic sounds and were looking forward to having a yummy dinner.

We drove to Arnau – a National restaurant – where we had horse meat accompanied with „bestbamark“ (noodles) and „boursaky“ (bread). Yes, horse meat.
Kazakh cuisine is traditionally focused on horse meat.

I have to admit that it tasted a bit like venison – so def. not as bad as „expected“.
We talked, talked and talked – had tea to beat the cold outside and left quite late by taxi (don’t forget to bargain! – Google translator will help 😉 ).

DAY 2
He got up quite early in order to work and I enjoyed the sunrise above the city of Astana, looked up my route on Google maps and left to the bus station.

The situation in the bus was quite weird: again, no one spoke English – so no one was able to tell you whether you were riding in the right or wrong direction; further the bus Driver and the ticket salesman played music with their cellphones and in between those tunes one of them announced the bus stops. The craziest part: it cost 90t only (20cent).

My first stop was – THE MALL: Khan Shatyr.
Coming from my sunny Abu Dhabi – I had no winter jacket, gloves, beanie nor proper shoes – reason why I first had to get all of this. 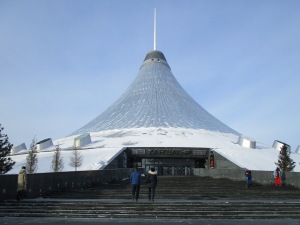 After shopping I went to the Sky Beach Club which is located on the upper floor of the mall. It is comparable to Ski Dubai – just the opposite: Beach.

Funny enough that it was packed by locals which apparently felt like escaping from the freezing cold outside (-22°C).

Weird facts: you can buy your gold fish from the machine & Kazakh look more or less all the same – at least to me… 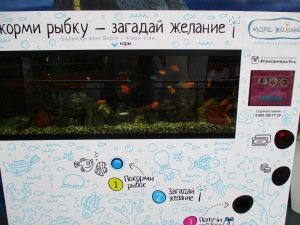 Equipped with my winter stuff I left the mall in search of the „I LOVE ASTANA“-sign. 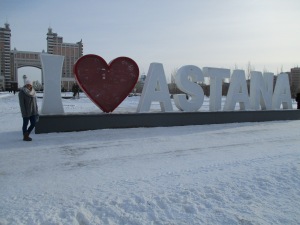 The way towards the sign was quite slippery due to the frozen ground but it seemed that I was the only one bothering. All locals were covered in their fur fashion, did not talk to me and just mind their own business. Somehow sad yet „ok“ since every Nation has its own way of living.

In front of the 97m-high Bayterek Monument Tower I spotted an exhibition for the EXPO 2018 – all countries were represented incl. the UAE. 🙂
Great to see a small piece of home in between this rather cold environment.

My next stop was the Rafe Cafe which – as per google – offered the best hot chocolate.
Got to admit: yep. Indeed.
It was delicious – so chocolaty, thick and not fluid like usually. I enjoyed the cosy environment a little longer to escape from the devastating frostiness. 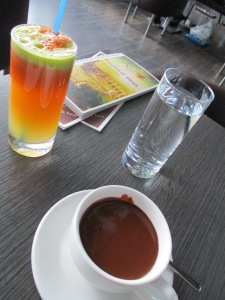 Till now I have never experienced such a cold weather: The wind attacked my skin, nose, eyes & hands. It seemed that you were about to lose all your limbs. I was literally freezing my tail off.

When I recovered – I left the coffee shop, got to the bus station and somehow made it to the Pyramid and the mosque. 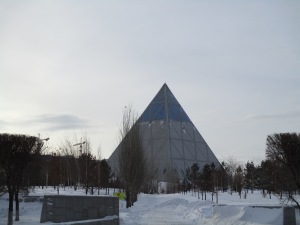 70% of Kazakhstans population is Muslim and 26% is Christian. 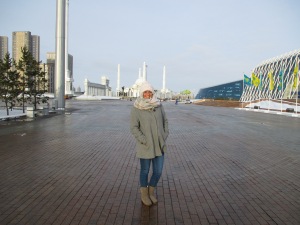 Near the mosque I met a lady – randomly – who took me to a private exhibition.

Funny enough: We did not have any language in common but somehow communicated beyond words. After meeting her, I also met her sister and both were friendly enough to introduce me to the exhibition-head.

The exhibition-head (famous) showed me all paintings, handmade embroidery etc. with pride and all of a sudden I felt integrated.
They offered me food, drinks, we took several pictures and had a blast.

This experience was totally unexpected and opened my mind as well as heart. The best example that the universe leads you to beautiful things – if you embrace it, go with the flow and let it just happen. 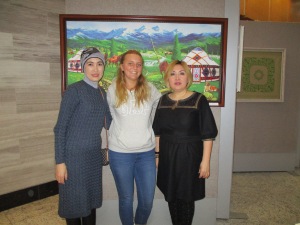 These two beautiful ladies brought me to my bus station; rode the bus with me (cuties – they wanted to make sure that I get home safely…) and hugged me prior leaving. Wow.

With a heart full of gratitude I waited for my BF.

At around 20h we left for Dinner at Epokha – a restaurant which was kept in the „Soviet Union“-spirit. We enjoyed „pelmeni“ and „shashlik“ with potatoes while observing the “Cold war”-decor. Random.

This place converted in a dance cafe around 22h – interesting to watch – but we were too tired to join them.

DAY 3
He had to get up early, again, I stayed a little longer in bed – snuggled up & watched the ice storm outside. Yes, ice storm. 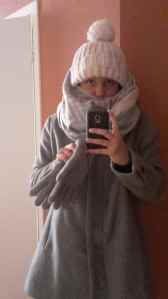 Due to those bad weather conditions I was only able to walk to the closest mall where I enjoyed a local crepe with cream.

..Funny: since I was unable to read the menu – I took a Picture of it, sent it to my best Russian friend who then recommended a dish..

Subsequently I went downstairs to check on their local products at the supermarket. Well. I was surprised and def. shocked with the whole scenario.

Deeply impressed I went back home. I enjoyed some series, chilled out, wrote some blog posts and waited for him to come home.

With a pretty cool Taxi we drove to the famous GQ Restaurant.

Yes, right. A classy rooftop restaurant with a splendid view over Astana – the capital of Kazakhstan.
We ate well, drank a glass of bubbly, fell in love with the bread and enjoyed the view.

The taxi drive towards home was – for the first time – AMAZING! Why? Because we were able to communicate properly with the driver.
An English speaker? No. But a DOer. Why? He had a translator app which he actively used. He talked to it in Kazakh and the outcome was in English. Nice!
We were truly impressed, laughed and bombed him with many questions in regards to life over there, working conditions, language etc.etc.
We def. had the HAPPIEST ride – ever.

The plan was to enter the pyramid and the mosque but cold shock came in between. I am serious.
While standing at the bus station, I started feeling dizzy and very cold. We went back inside and I was barely able to move, my skin was red and I felt exhausted. The shower felt like being burned alive.. not a good idea – at all.
I fell asleep while being cuddled and when I woke up I felt slightly better.

We went to the Astana Mall for Lunch – a quick one.
And then it was already time for the “good bye” or at least a “see you later”.

LIEBE around the world